At the start of 2017, Bald Mountain was tasked with safely producing 278,000 gold equivalent ounces over the year, doubling the mine’s previous annual production.

Initial mine and metal planning estimated 256,000 ounces of production for the year. In true Kinross fashion, employees quickly came together to source opportunities that would bridge the ounce gap and meet their production goal.

The first group to come to the table with an opportunity was the Technical Services team, who suggested to use strategic blending to mitigate any low-permeable ore (ore that moves liquids slowly due to high pressure in the rock). They quickly realized the current heap leach pads would not do the trick, and worked tirelessly to construct new pads ahead of schedule and on budget.

The Ore Processing department improved carbon handling procedures, decreased carbon volumes in the Carbon In Column (CIC) train, and maximized plant throughput. As a result, plant efficiency increased from 91% in 2016 to a consistent 97% in 2017.

These improvements, along with tireless efforts by the Mine Ops and Maintenance departments, allowed the site to deliver ten million tons of ore ahead of budget, with final ounce production reaching a record 282,715 Au oz. eq. for 2017!

“What a year for Bald Mountain. We took the impossible, and crushed it! As a site, we pulled together to rapidly change and improve our operations, not only meeting, but also exceeding, our goal while maintaining safe operations. Thank you to all Bald Mountain employees – each of you played a key role!” said Joe Kemp, Ore Process Manager.

Bald Mountain’s record production would not have been possible without the efforts of all departments, employees, and contractors at the mine.  In addition, many Round Mountain employees worked tirelessly to increase throughput at the Gold Hill refinery, enabling the final step of Bald Mountain’s gold production. 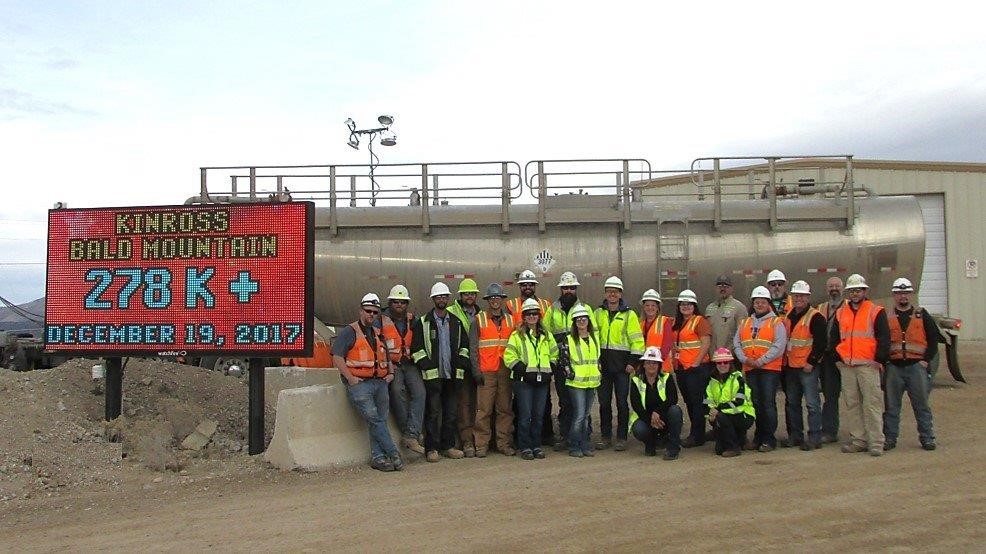 Representatives of the Bald Mountain team on December 19, 2017, the day the 278,000+ ounce shipment departed for refining.