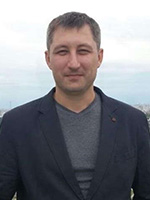 Aleksandr joined Kinross in 2009 as a technician, where his strong work ethic and performance earned him the position of supervisor. He is known across Kupol for his innovative ideas that have helped increase performance of the mill and mine.

Under the supervision of Aleksandr, Kupol has reduced costs by decreasing reliance on contractors and suppliers, largely due to his ability to train his team on tasks that would typically need additional support.

As an example, his team was instrumental in the design and installation of the filter cake plant at Kupol. Instead of contractors implementing the automatic process control system, Aleksandr worked with his team to learn and implement the system, saving the Company more than 5 million rubles!

He also designed the automation system for a wastewater treatment plant. Equipment for the project is currently being installed and it is estimated it will save Kinross over 3 million rubles.

Aleksandr was responsible for leading the upgrade and expansion of the DeltaV mill process control system. The project would have cost the Company several million rubles if production needed to be suspended, however Aleksandr found a way for the mill to remain in operation, saving time and money.

Aleksandr is always on the lookout for opportunities to improve safety around the mine and ensure his colleagues stay safe – both on and off the clock.

For example, he upgraded underground radio communication systems, helped commission the centralized control system for outdoor lightning, designed and implemented the control logic for the fire sprinkler system at camp, and installed an automatic switch for the mill fire hose.

“Since the day he arrived, Aleksandr has been keeping employees at Kupol safe both at the mine and at camp,” said Korolev Valeriy Sergeevich, Instrument Technician, CI1, Site Services, Kupol. “He is constantly innovating and finding ways to save the Company money and keep his work environment up-to-date.”

Get to know the 2022 LOVA winners – watch video